The Story of a Sweet Girl with a Fighting Spirit #laceystrong 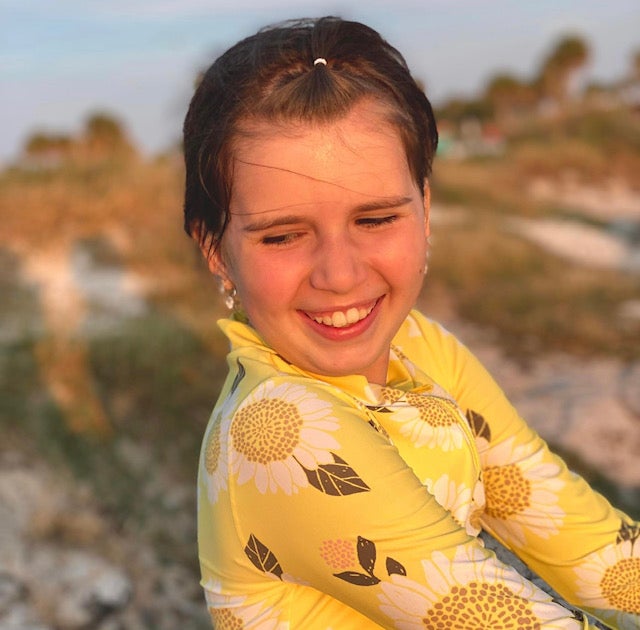 Get married. Have a baby.
It was always said so simply to us. Like you manifest these ideas and then they just happen.
Our sweet girl’s story starts before she was even conceived. After years of heartache trying to add a child to our family, we started the path of infertility supports. In October 2010 we were so happy to hear it worked! We were pregnant!
Lacey Marie was born June 27th 2011. She came on her own schedule and fast. She was ready to join the world and our hearts exploded with pride. She was absolute perfection!
As a baby Lacey continued to do all things on her own schedule, and within her own time. She was not in a rush for anything. Our super laid back, busy observing, oh so serious little lady.
Lacey has always been so kind, always so aware of how others may feel, and super snuggly. She is a lover of all animals and has always planned to be a veterinarian. She has always wanted to be a doctor to big animals.
When Lacey was a toddler an innocent freckle appeared on her left hand, third finger. Over time we started to notice that this freckle began to morph into something different. It began to grow in size, change in colour and shape, and started to bother her. She didn’t like the appearance. We didn’t like how it looked either however every time we asked about it to her pediatrician it was always brushed off as “non-sinister”.
In the Spring of 2018, Lacey was in grade one and she crawled up on my lap and told me how classmates at school were making comments about her mole. She added how she would tell them that it was permanent marker, and that she drew it on herself. That is when I knew I had to push harder for it to be removed.
After seeing a pediatric dermatologist who also wouldn’t remove it and frankly told me I shouldn’t be looking to have it removed just because my 6 year old wanted it removed I pushed harder. I asked him to refer me to someone who would remove it.
In August 2018, Lacey had day surgery to have the mole excised. Everything in surgery went smoothly and her hand healed well.
In November 2018 we received a call requesting us to return to the surgeon’s office. After meeting with the surgeon we were told that there was some thinking from the pathology process that the mole was a spitzoid melanoma, stage 0. The plan was to have a second surgery as a precaution to get larger margins.
January 14th 2019 Lacey had her second day surgery. Again the surgery went well and her hand healed perfectly.
Labour Day weekend 2021 Lacey came to us and asked if it was normal for her knuckle to look the way it did. A pea size lump was present under the scar from her surgery 2-3 years ago.
We made an appointment right away at her pediatrician’s office.
After months of trying to get to the bottom of what the lump was we found out December 20th, 2021 the lump was stage three melanoma cancer. The doctors were able to remove the lump by amputation, by removing part of her hand and three of her fingers. It was a tough go, but we got positive news as the post surgery scans showed that the cancer did not spread!
Fast forward to April 2022…Lacey developed a pain in her leg. The pain increased to where Lacey needed to be on strong pain medication. Weight loss started to occur and a lot of fatigue. After receiving the necessary scans, we received the devastating news that Lacey’s cancer has returned, and has spread to multiple areas of her body.
Lacey has just started her treatment. This is going to be a very tough go for Lacey.
Please pray for Lacey!
#laceystrong
The Radcliffe Team is raising funds for Lacey and her family.
We are holding a silent auction for 4 tickets to Country night at Summerfest with a $100 gift card for The Hub in Lucan. Please visit our social media for more details.
https://www.instagram.com/radcliffeteamrealestate/
https://www.facebook.com/radcliffeteam
By using our site, you agree to our Terms of Use and Privacy Policy